This was an at sea day between Oslo, Norway and Le Havre, France.

I slept pretty well, and we didn’t get up until 11:15 a.m. After getting dressed and ready to go up to lunch, I looked at the Legacy schedule and saw that I had missed the morning classes. Drat. My mind was set on afternoon classes, but that is next Sunday! On the way to breakfast, I found the classroom and Dave was still there packing things up. I apologized to him and he said that Geoff had tried to introduce me several times. Great! Now everybody knows that I missed the first session. We had lunch in the Windjammer and afterwards I found Geoff in the Aquarius dining room and apologized to him also. That was embarrassing.

I found the library and checked out a book, and read until 2 p.m., when I decided to take a walk on Deck 10 around the ship (1240 feet for one lap). The ship was going 20 knots into a 20 knot headwind (so about 45 miles/hour) and it was cold, about 13 C (55 F), so I was happy to stop at the shuffleboard on the port side to watch Geoff and Luc play shuffleboard – they do this every cruise, apparently. After awhile, they asked me to play and so we played until about 4:30 p.m. The wind would catch the puck occasionally and move it, and the puck would curve on almost every shot. I was windblown and my head was sunburned…but that was a lot of fun. I got to know Geoff and Luc a bit better, and vice versa. 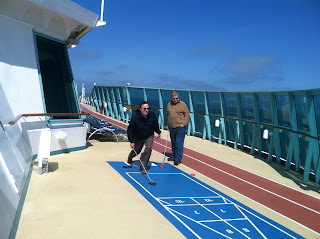 I rested for awhile in the cabin, and at 6 p.m. we went to dinner in the Aquarius dinging room at Table 32. Some of our seatmates changed. Sandip and Edwin brought Linda’s meal ordered the night before, and I had the Filet of Beef which was excellent. The desserts are very appealing (Edvin gives us the yummy-yummy menu every night) and delicious. I usually have vanilla ice cream.

After dinner, we headed back to the room and I read my book, and we went to bed after 9 p.m. I haven’t opened my laptop computer yet, and it’s been 36 hours since I last checked the Internet. The Internet on the ship is expensive - $50 for 100 minutes, so I’m avoiding it.