Torill drove us through western Oslo and up the Helmankoller mountain to the north of the city, showing us some Olympic facilities and other points of interest. We stopped at the Riksarchivet (the Norway National Archives), and saw some of the research areas, and took some pictures. 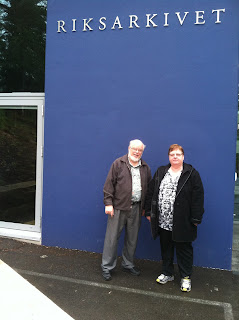 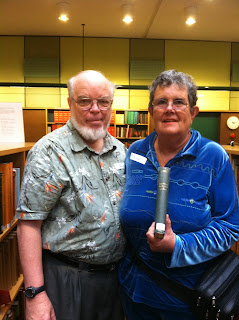 Then it was off the mountain to stop at a shopping center so Linda could buy something from Norway. She didn’t. We toured around downtown Oslo after most of the rush hour traffic was gone, and stopped for dinner at the Engebret restaurant, where we treated Torill to dinner. 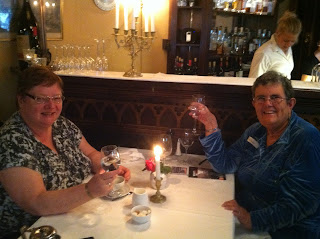 It was too late to do more sightseeing, so Torill dropped us back at the hotel at about 8 p.m. I posted two pictures to Facebook from the Riksarchivet.

I decided to charge my iPhone because I had taken pictures and checked the Internet occasionally over the last two days. My iPhone charger did not fit into my power adapter, and my extension cord did not fit into it either, and the adapter would not fit into the wall plug. I went down to the desk and they said I could buy an adapter two blocks over, but the shop was closed. The desk man offered to charge the iPhone, so I took him up on it and worried all night about it! I used the hotel Internet to read my email, read blogs (595 since Wednesday afternoon) and check in on Facebook.